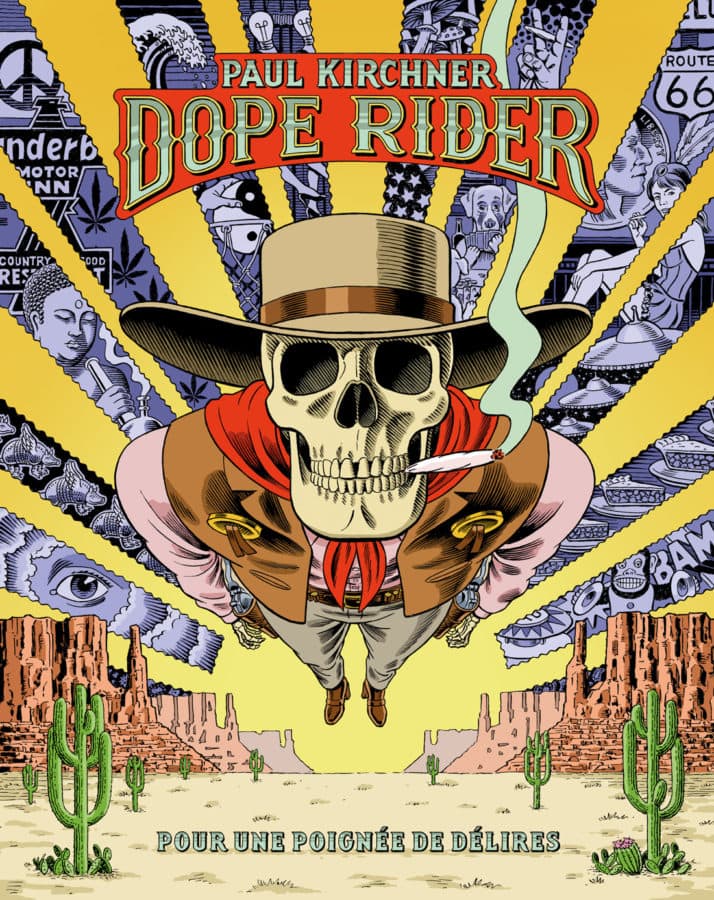 Dope Rider is back in town! After a 30-year hiatus, Paul Kirchner brought back to life his iconic, bony stoner hero whose first adventures were a staple of the psychedelic counter-culture magazine High Times in the 1970s and 1980s.

The new stories collected in this book were all created after 2015 and despite the years, Dope Rider has stayed essentially the same, still smoking his ever-present joint, getting high and chasing metaphysical dragons through whimsical realities in meticulously illustrated and colorful one-page adventures. Fans of the original Dope Rider comics will still find the bold graphical innovations, dubious puns and wild dreamscapes inspired by classical painting and western movies that were some of Dope Rider’s trademark.

This time though, Kirchner draws from a much larger panel of influences, including modern pop – and pot – culture (lines and characters from Star Wars as well as references to Denver as the US weed capital can be found here and there) and a wider range of artistic references, from Alice in Wonderland to 2001: A Space Odyssey to Ed Roth’s Kustom Kulture. Native American culture and mythology, only hinted at in the classic adventures, is also much more present in the form of Chief, one of Dope Rider’s new sidekicks. Kirchner’s playful, tongue-in-cheek humor binds together all these influences into stories that mock both the mundane and the nonsensical alike.