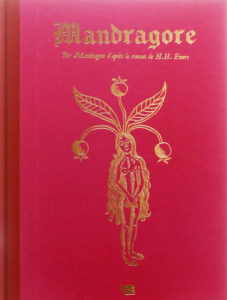 According to the legend, the mandrake is a plant that grows at the foot of the gallows, born from the earth fertilized by the last seed of the hanged man. In a town on the Rhine, at the dawn of the 20th century, Professor Jacob Ten Brinken creates a human mandrake. He performs an artificial insemination on a prostitute with the semen of a condemned man taken at the moment when he has just been guillotined. Thus is born a little girl who will, as she grows, reveal strange powers and lead those around her to tragic destinies.
But the story takes another turn when Mandragore discovers a new feeling: she falls in love with her cousin Franck Braun.
It is then her turn to be in danger…
The author Mandragore brilliantly pays tribute to the work that gave her her pseudonym.
Between romanticism and decadence.