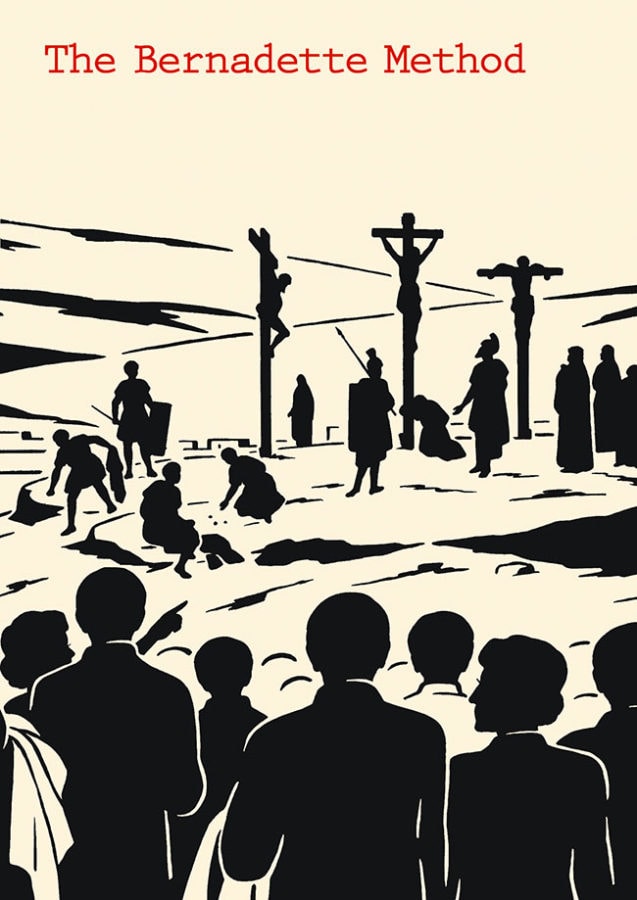 In the early 30s, in the small industrial town of Thaon-Les-Vosges, a group of young virgins, secretly dedicated to the Catholic Church, to Christ –the “Bernadette sisters”– design a striking catechism method based on stencil technique: black silhouette on a white background.
Thus begins the “Bernadette epic”: the incredible adventure of a community of women, who for 30 years will think, express themselves, act and fight with pictures and images. For the adventure is a combat. The purpose is to fight the intellectual, moral, political artistic depravation of the modern world. The aim is to fight image to image, fight with the same weapons against “materialist art, cubist and communist”. In the heat of the 20th century, the objective is to counter attack modernity, no less. White against black, picture against picture.
“Silhouette as a teaching method gives a maximum photographic impression on the retina”: the Bernadette sisters design stencil pictures of a singular effectiveness: cut out with scissors or knives. Sharp images.
70 years after they were designed, the Editions Matière publishing company has rediscovered these hundreds of pictures and prints and have edited them as a “bande dessinée”, a comic strip. The extraordinary visual and narrative strength of the Bernadette stencils is still intact today. Via this new set up, the Method tells its own story, reveals the story of its invention, unveils its issues, its ambitions, its rise and fall: the ban by the Catholic Church, its vain attempts to auto censorship and finally the long oblivion till today’s rediscovery.